CONNECTING TO THE PAST: Historical and family ties surround donation of century-old switchboard to co-op 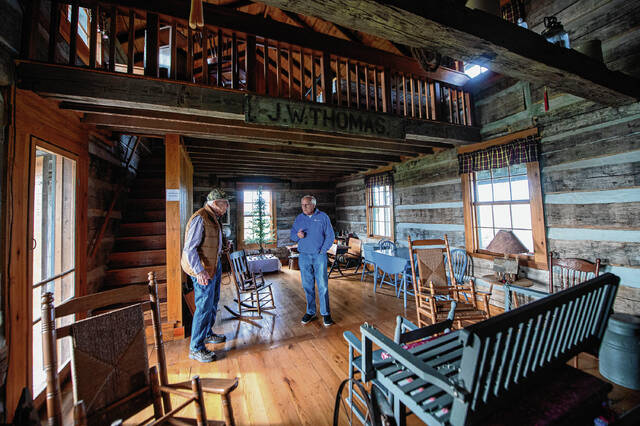 Lowell Thomas, left, talks with his cousin Darrell Thomas in the original cabin that was used as the first exchange link for telephone service from Fortville to McCordsville. The original switch, from the McCordsville Telephone Company, was in the Thomas family for generations before the Thomases donated it NineStar Connect, the descendant of the McCordsville phone company.

HANCOCK COUNTY — Long before people made telephone calls by pressing buttons and tapping screens, they needed someone in the middle of the process plugging in wires.

It’s a history Greenfield-based NineStar Connect knows well, and is part of what led it to the utility cooperative it is today.

A piece of that history around 125 years old has returned through a donation from a family with connections to the co-op’s past and present.

Lowell Thomas, 81, was working on the family farm in northwestern Hancock County one day as a boy when his grandfather, Roy Thomas, had him bring something out of storage in a barn.

It was an oak box with thick wires spilling out of it.

“Back then, ‘switchboard’ didn’t mean anything to me at all,” Thomas said.

But decades earlier, it meant quite a bit to residents of McCordsville and Fortville looking to speak to one another over the phone.

“He said, ‘Keep it; it’s a piece of history,’” Thomas recalled his grandfather telling him.

Lowell Thomas’ great-grandfather, Jim Thomas, had worked for the McCordsville Telephone Company, including as a lineman.

“He’d done a little bit of everything for the old McCordsville Telephone Company,” Thomas said.

Lowell Thomas kept the switchboard for decades and recently donated it to NineStar Connect, whose roots include the small telephone company that relied on the device.

“I’ve had it for all these years,” he said, adding he had the switchboard refinished once. “It was just something I wanted NineStar to have.”

It was the first switchboard on the exchange linking phones in McCordsville and Fortville. Before going into storage in the Thomases’ barn, it was in a nearby home where Lowell Thomas’ cousin and NineStar board member, Darrell Thomas, currently lives.

In the days of crank telephones, when someone in McCordsville wanted to call someone in Fortville, and vice versa, they’d use their phone to connect to a local operator. That operator would then plug in a wire on a switchboard that would connect the caller to an operator at the exchange switchboard, who would make the final connection by plugging in a wire linked to the call’s recipient in the other town.

As technology improved, those connections would go on to be made automatically using a rotary dial, and then digitally.

A label on the switchboard indicates it was built by Indianapolis-based Modern Telephone Co. McCordsville resident Loren Helms worked there in 1895 when he strung a wire across a fence from his sister’s house to their mother’s house and installed the first telephones in town. Other neighbors soon joined the line, and the McCordsville Telephone Company was born.

That company went on to be part of what became NineStar Connect in 2011, which provides not only telephone service, but electricity, water, sewer, internet and television throughout the region.

While there’s no date on the switchboard, Burrow doesn’t think it can be too much older than the McCordsville Telephone Company.

“I have to believe it goes back to the first year or two of the company,” he said. “My guess is once he (Helms) founded the telephone company, he was immediately wanting to connect to other exchanges, or towns. It would’ve made a lot of sense to be connected to both Fortville, the next town up the road; and probably Indianapolis, which would’ve been the next town to the west.”

A self-described history nerd, Burrow said he was thrilled to learn of the donation.

“To be able to have a piece of our company’s history going back to quite literally its first years of founding was extremely exciting and I thought just extraordinarily generous of Lowell to do,” he said.

Making it even more special was that it had operated in the home Darrell Thomas, NineStar’s longest-serving board member, currently owns, Burrow added.

“It kind of brings a lot of things for this cooperative very much full circle,” he said. “In realizing that while, for example, we’ve invested in fiber-to-the home, looking to the future for the next 50 to 100 years with that technology and what it may bring, there’s still connections we have all 126 years ago to our founding. It’s just kind of a neat feeling.”

The switchboard will go in a display case with other relics of NineStar Connect’s history.